It’s almost 5 in the morning. I seriously have a problem. I leave in twelve hours to start my journey and I’m already exhausted and fatigued beyond imagination or description. From my fingers to my toes, I feel like I’ve been going through Hell Week. Only I’m not hypothermic, and my dad isn’t a drill sergeant. Though if I don’t finish this fast, and he get’s up, he sure will have me running laps.

So to the point, and I’ll try and stay on it. Melk, Austria.

Can I say wow? How do you stand in the face of something so magnificent and not utter complete nonsense because you are rendered so speechless? Letters can’t form into words, can’t form into sentences when thinking about Melk.

So let me describe it as best as I can, or at least in ways it made me feel. When you are up in the Abbey, everything below is dwarfed by your sheer size. You have no equal. No peaks, no other buildings, to compete with your imminent rule over as far as you can see. If this was a castle, and you were a king, you’d be quite pleased. But it isn’t, or wasn’t. This was an Abbey, filled with worship and penance.

Even a golden cross that apparently contained a large shard of wood from the original Cross that Jesus of Nazareth was crucified on. Yeah, and it was stolen from Melk, taken to Wien, brought back to Melk, and then I forgot what happened next. Google it. I’m sure it’s fascinating. The Abbey is now one hell of a historical landmark – equipped with ancient religious artworks, manuscripts, and library books. Over 10,000 of the original 100,000 still remain – and the room is dustier than your grandmother’s attic, so asthmatics be wary.

One of the things I did notice, in one of the many rooms we toured, was what exactly was being portrayed in some of the pieces of art. There was a mosaic portrait series depicting the torture and crucifixion of Jesus. The way it was drawn made Jesus look almost like an invalid, his torturers appeared almost comical in appearance – ancient characters that you would imagine in a sunday paper’s comic strip. The details were not for the faint of heart – and I would imagine at the time it stirred a lot of controversy and emotion.

The immediate thing I noticed after was the juxtaposition with the adjacent room. Filled with relics that could have been worn, or used by a king, were apparently worn by leaders of the Abbey.

See the pictures below: 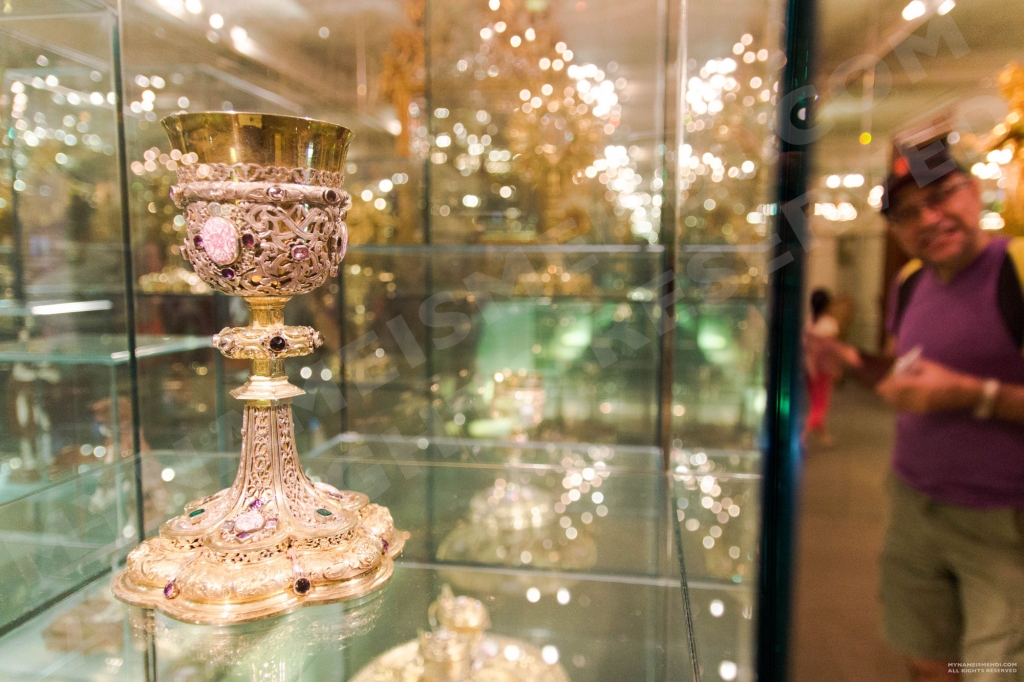 Thanks to PimpSwag.com I’ll have my very own version of these delivered before Football season kicks off. 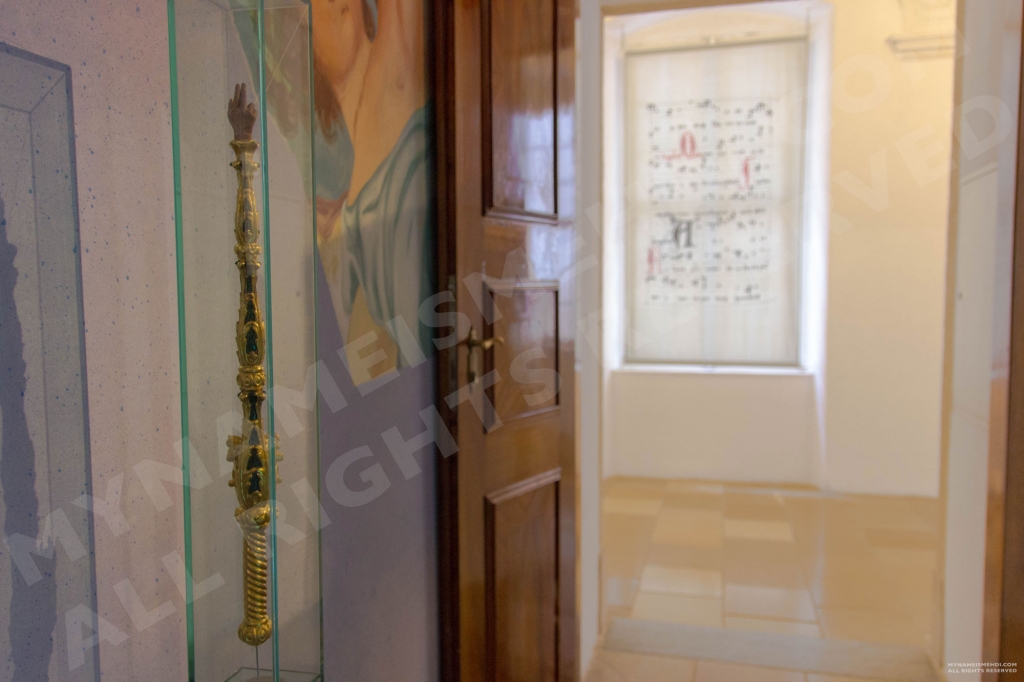 And for the low price of one crucifixion and a life of celibacy, you too can own this Pious Backscratcher . 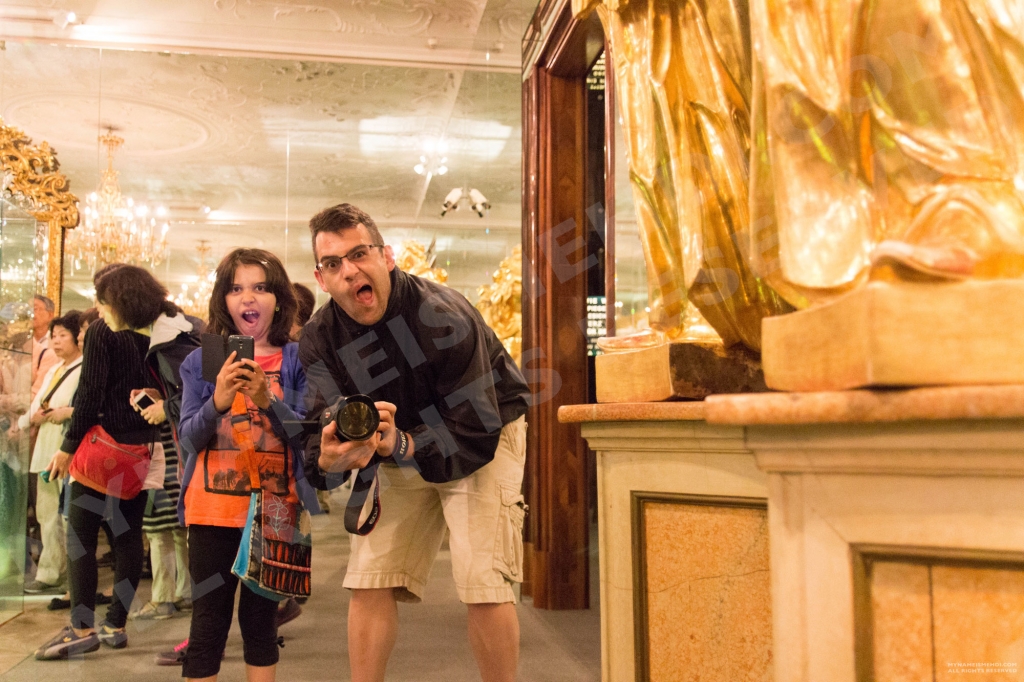 The fact she takes after me well is proof she’s my blood. Love this kid. She’s gonna grow up to be quite the firestarter. 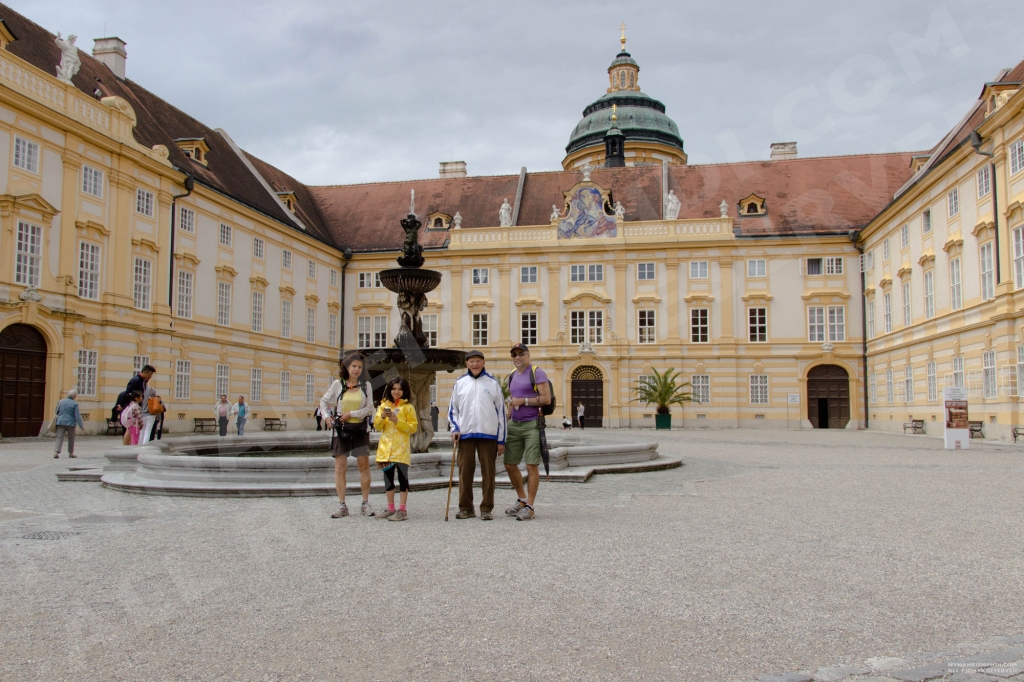 This place is big. Really, really big. Like Palace of Naboo big. Thankfully no Jar Jar.

Neurons fired in quick succession. From the paintings to the relics, to Jesus, to the Priests – or whatever who wore these things. I started to think more about Jesus. More about this guy, whomever he actually was. Son of God, schizophrenic, martyr. I thought about all the stuff I know that was said about him.  A picture depicting a pipe isn’t a pipe in itself, so I can’t completely believe that a story depicting a man dying for all of mankind, passages depicting his conversations and messages to the people of that time period, to be exactly as it was – as he was. Yet the fact that there was this man, this character, that supposedly wanted for nothing. Asked for nothing for himself. Subjected himself to ridicule, suffering, death. Instructing those that would listen to him not to govern in churches, and onto men, but to let God govern all, as he knows the heart of all men, and at the heart of all men is death.

Then he had these people who followed him. Apostiles. Many of them died for following this guy. Not just died, I’m talking about being crucified upside down (Peter), imprisoned, tortured, and finally beheaded (Paul), etc. All of them died these extremely graphic and horrible deaths, and they did so without renouncing their faith in this man. Now, I know in our place in time we are quite accustom to people dying for their God(s). I want to just say, it’s one thing to willingly allow yourself to be imprisoned, subjected to who knows what kind of torture, and finally beheaded – all without renouncing what you believe in, or being guilty of any actual crime; and then there’s suicide bombers.

It’s real simple here, you can live for what you believe in – or you can strap a bomb to your chest and walk into a hotel lobby, scream some shit about God being great, and then pressing a button and taking out a few dozen innocent lives – because someone told you that it was written in some book that God thinks it would be a brilliant past time to go killing folks who haven’t lifted a finger against you. I don’t know about you, ISIS I’m talking to you, but I would rather succumb to the void of nothingness than to die and find out your God was the real deal. Sorry. No.

So back to Melk. You have these pictures of Jesus being turned into a meat fondue set, telling people not to govern men, and then you have these Abbey folks dressed in decor that you seriously would expect royalty to wear, have gold trimmings over everything that the carpenters could think to embroider with, and these massive, massive, landmarks – all to serve God. It was then that I thought the following.

We want evidence, we want rules, we want laws. We want to govern. Over physics, over people. We want solutions to problems, and answers to questions. We cannot work in the realm of God, if there is one, because we aren’t Godly. We’re just these flesh and bone things. And for the most part we are so petty that we can’t think to help anyone other than ourselves.

The entire day had me thinking. Thinking about tomorrow – today, it’s now 5:20 a.m. (shit). Thinking about leaving for Prague, and the unknown. The entire day since the moment we got in the car until almost before we left Melk the sky was almost black with storm clouds. You could smell it in the air, feel it in your hair. While I slept in the car (because I don’t sleep at night, since I’m so committed to doing this writing thing), it apparently started raining so hard on our way there that traffic slowed to a halt until it passed. So tensions were high while walking around the grounds.

Will it rain? Will it flood? Will it sprinkle or pass us by?

Let me explain, below is a YouTube video, to a song, written by Dustin Kensrue. Now, you can listen to the Spotify version  – which you should – but. If you listen to the YouTube version, the first minute is him talking about the song, but not actually talking about the song. It’s a narrative. It’s almost asking you to think about things differently.

Dustin talks about how there are dark clouds on the horizon – of our lives, in our days. Now, we don’t know what those clouds could bring. In that darkness, do we find relief or agony of heavy floods? We don’t quite know.

There were dark clouds on the horizon yesterday. At times, the end was really near – seriously we almost had to turn back because of the rain – however by the end of touring the Abbey the sun came out in strides. As if it had been lagging behind this behemoth waiting for it’s chance to shine (literally).

There are dark clouds on my horizon. I’m freaking out about tonight. And I’m fucking tired (sorry mom, I’ll put a dollar in the swear jar). However, I can’t just sit here. I can’t just experience this day, these days. Document them in pictures but forget the narrative. Lose the thoughts that come as emotive responses to all I hear, see, touch, do.

Song On My Mind: