Here we are (finally) standing at the end of another year, and as axiomatic as it may be, never does it ceases to amaze me how inattentively we lose track of time. Where did December go? The last time I checked the holiday season -with its turkey and stuffing, department store santas, and yuletide carols- just got here. Another thing that followed Fall was the creeping feeling to write something, and try as I may have to dismiss it, the feeling persisted through the toils of work and rainy weather. So in between all the days that made December, and the moments that filled them, I let my mind find the words for the sentences that my heart would feel but couldn’t speak.

Who would have thought an age old Christmas song would be the catalyst for tonight?

Not too far into December I was caught off guard in a department store checkout line where I found myself attentively listening to the music that was playing overhead. Something familiar, and yet entirely new to me was ringing in my ears: Joy to the World. You know the one I’m talking about? The one that goes, “Joy to the world, the lord has come, let earth receive her king.” Yeah, that one.

As I listened, I found the lyrics come crawling back from the memories of Christmases past and I froze after my lips inaudibly mouthed the line: repeat the Sounding Joy.

Repeat the Sounding Joy. What a profound statement, but for all I know joy does not make a sound, or does it?

I left the store, continued on with my day, which in turn became my week, and yet my mind kept coming back to that line. Repeat the Sounding Joy. When the following weekend finally came I realized why it sounded so familiar, Joy was sitting on my bookshelf for weeks.

I picked up Surprised by Joy by C.S. Lewis mainly for the essay, The Four Loves, that was binded with it. I knew the content was mainly Lewis talking about his journey from Athiest to Christian, which was something that I wasn’t particularly interested in reading – well, until now.

So for the last two weeks I’ve poured over the pages to see if Lewis had anything to say on Joy, anything that might speak to this inconspicuous verse. There were many great quotes, but I highlighted these three in particular:

…it is that of an unsatisfied desire which is itself more desirable than any other satisfaction. I call it Joy, which is here a technical term and must be sharply distinguished both from Happiness and from Pleasure. Joy (in my sense) has indeed one characteristic, and one only, in common with them; the fact that anyone who has experienced it will want it again. Apart from that, and considered only in its quality, it might almost equally well be called a particular kind of unhappiness or grief. But then it is a kind we want. I doubt whether anyone who has tasted it would ever, if both were in his power, exchange it for all the pleasures in the world. But then Joy is never in our power and pleasure often is.

All joy reminds. It is never a possession, always a desire for something longer ago or further away or still “about to be.”

…because the very nature of Joy makes nonsense of our common distinction between having and wanting. 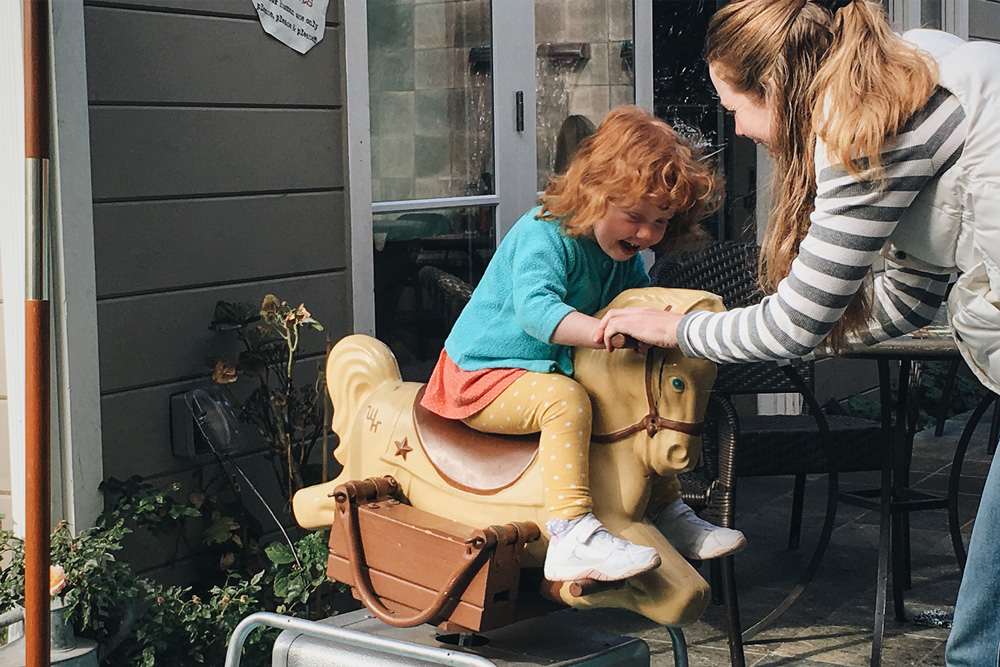 Who would have thought an iPhone could take such a good photo?

Of all things Lewis was, succinct wasn’t one of them. To say he has spent some time thinking about the nature of Joy is an understatement. He’s thought more on Joy than I have thought on any one topic, except for maybe Star Wars. So what does this tell us about Joy, or more specifically, this Sounding Joy that bares repeating?

With all Lewis has said on Joy, I would like to think the lyric doesn’t speak to any one thing, but instances that Joy derives from. There will be moments in our lives, or the lives of others, that are going to be worth acknowledging or celebrating. Remember, true Joy isn’t contrite or concocted. It’s that exhilarated, sometimes bittersweet, feeling that comes suddenly in any given moment where we also find happiness and pleasure. Be it birthdays or beaches, a baby’s laughter or tireswings. It’s that fleeting feeling you had in the summertime on a lazy sunday joyride. Windows down, and Tom Petty turned up. Everything was fleeting in that moment, but everything was also right.

Of all I will remember of 2015, I try most to not forget this picture that I took one morning after church. It was random, unstaged, and certainly unexpected. Funny enough, the picture is so beautifully composed it was as if the universe had set it up to be this way and only asked of me to remember to look up and be quick with the iPhone. This snapshot of a child and a mother (whom I do not know) is the quintessential representation of Joy.

So no matter where the seas of 2016 takes us, be it providence or shipwreck, may we repeat the Sounding Joy wherever we find it -or wherever it finds us.

Song On My Mind:

Sufjan Stevens – Joy to The World

This site uses Akismet to reduce spam. Learn how your comment data is processed.